For the first time since the 1990s, the mountain of debt is growing significantly again

There have been four growth phases in the development of federal debt. The debt burden had been trending downwards since the introduction of the debt brake in 2003, but now it is rising again.

In the wake of the COVID-19 pandemic, government debt is rising worldwide. The measures to cushion the economic impact of the pandemic called for substantial public funds. In Switzerland, too, around CHF 30 billion has already been spent on short-time working, loss of earnings compensation, medical goods and other support measures, and government debt has recently started to grow again. What does this increase in debt mean in a historical context?

The development of the Confederation's gross debt1 in absolute terms shows that the debt mountain grew substantially between 1910 and the beginning of the 2000s, with the exception of the post-war period and certain years which saw a decline. The chart shows that there are four phases in particular during which debt surged in a short period of time.

The first and second phases span World War I and World War II, i.e. 1914 to 1918 and 1939 to 1945. National defence expenditure, mobilisation costs and social expenditure (including food subsidies and contributions to unemployment funds) increased sharply, while receipts, which at the time consisted largely of customs duties, decreased. Attempts were made to reduce or prevent shortfalls with the introduction of a large number of new taxes such as the war tax (first-time collection of direct federal tax), the war gains tax and goods sales tax (later value added tax). Nevertheless, the level of debt in 1945 was about six times higher than in 1918. 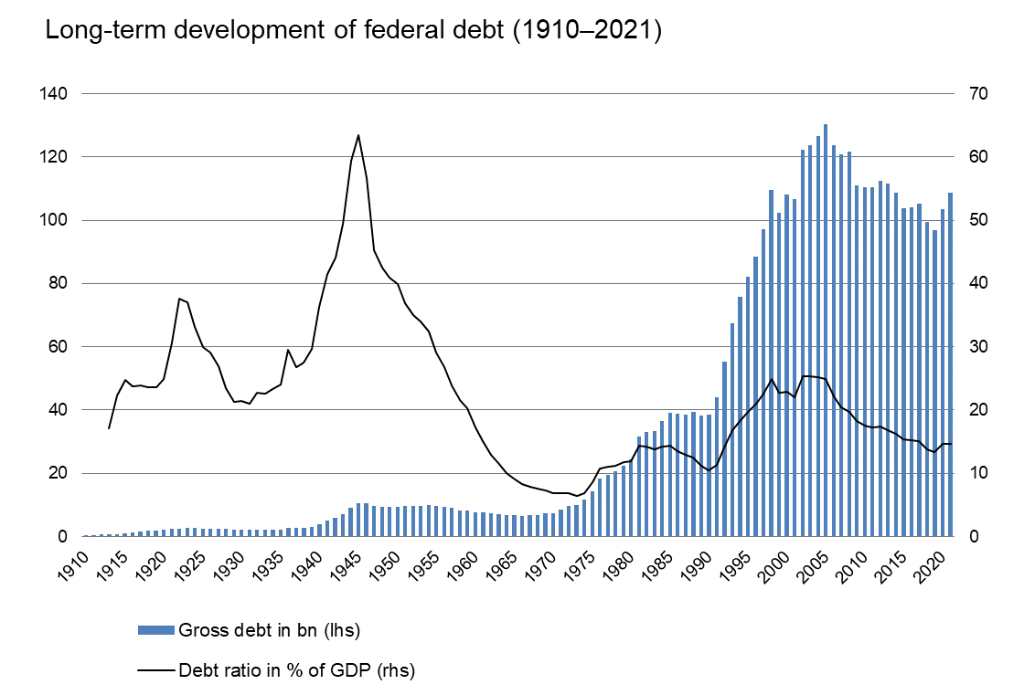 The increase in federal debt relative to economic output, nominal gross domestic product, is particularly striking. The debt ratio rose from around 17% before World War I to around 38% in 1922. Although lessons were learned from World War I, when Switzerland had been completely unprepared, the debt ratio is estimated to have surged to over 60% by the end of World War II, meaning that debt amounted to more than half of economic output.

After the end of the war, the debt ratio fell significantly again until the 1970s. This was due to solid economic growth in the post-war period and mostly negative real interest rates, combined with the consolidation of a number of newly introduced taxes. This development is clearly reflected in the debt ratio, but gross debt was also reduced in absolute terms.

Financing of new tasks and transition to a transfer budget

Debt rose for the third time in the 1970s. Various tasks were transferred to the Confederation in the post-war period. Social welfare contributions and the area of teaching and education accounted for a growing share of total expenditure. The federal budget thereby increasingly turned into a transfer budget. While this additional expenditure could still be financed in the 1960s thanks to robust economic growth, the federal budget slipped into the red in the 1970s, not least because the recession of 1974/75 put an end to the almost thirty-year economic boom phase.

Finally, in the 1990s, deficits in the financing statement and also the elimination of legacy financial burdens and the restructuring of pension funds and federal enterprises triggered another sharp rise in gross debt at federal level.

The turnaround came in 2003

The turning point came in 2003, when the debt brake was introduced after being approved by a large majority in a referendum. Its aim was to protect the federal budget from structural imbalances by stabilising nominal debt over an economic cycle. This binding expenditure rule, supported by relatively strong economic growth, made it possible to reduce debt in absolute terms from the turn of the millennium onwards.

The large-scale expenditure to deal with the COVID-19 pandemic has now led to a significant increase in gross debt for the first time since the 1990s.

The description of the development of public finances is based on the Swiss Historical Dictionary, see hls-dhs-dss.ch > Öffentlicher Haushalt (only available in French, German and Italian).